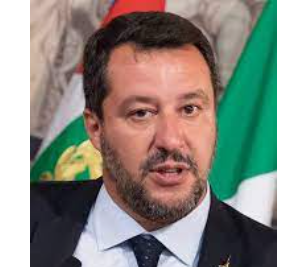 Matteo Salvini (File photo courtesy Wikimedia Commons)
"At a panel on the European reaction to Operation Guardian of the Walls this past Monday, Italian Senator Matteo Salvini announced that he would distribute the text of the Hamas Charter to his fellow members of the Italian and European Parliaments in order to raise awareness of the threat the pose.

Salvini said he would do this to make them understand the terrorist organization's intentions in its war against Israel and its ambition to spread radical Islam around the world.

The panel was hosted by The Jerusalem Center for Public Affairs (JCPA), headed by Dr. Dore Gold, former Director-General of the Ministry of Foreign Affairs.

Salvini, who is leader of the Italian League Party and is one of Italy's most senior leaders, stressed that he would work to boycott the upcoming Durban Conference, alongside the US and Canada.

"This is an antisemitic committee that does not deal with the issue of human rights at all," he said of the conference.

The JCPA panel also hosted Hungarian ambassador to Israel, Levante Banco, who stressed Hungary's support of Israel's right to defend itself against Hamas and condemned the firing of rockets from the Gaza Strip into Israel.

He reminded the panel that Hungary had blocked the joint EU declaration against Israel during the military operation, and confirmed that Hungary would also be boycotting this year's Durban Conference."
Date
July 7, 2021
Title
Italian Senator to raise awareness about Hamas goals in EU Parliament, The Jerusalem Post
Original Source
https://www.jpost.com/international/italian-senator-to-raise-awareness-about-hamas-goals-in-eu-parliament-673106
Attachment
Click here to view this article in MS Word/PDF format