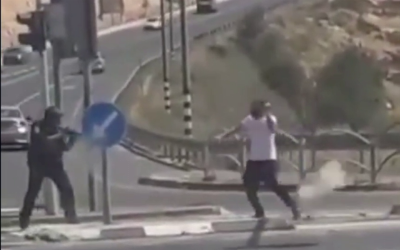 In this image from video, a suspect attempts to stab a police officer with a sharp object near the West Bank city of Efrat on April 30, 2021 (Screenshot: Twitter)

A Palestinian man tried to carry out a stabbing attack in the West Bank, and was seriously injured when he was shot by an officer on the scene, police said Friday.

The incident came amid rising tensions over the postponement of the Palestinian elections, as well as unrest surrounding the holy month of Ramadan.

A spokesperson for the police said the suspect was walking quickly toward an officer and an Israel Defense Force soldier while holding a broken glass shard near the Efrat junction, south of Bethlehem.

Police said the suspect was told to stop but continued walking in the direction of the officers.

"The police officer responded by firing and neutralizing the terrorist," the spokesperson said.

No Israeli soldiers or civilians were injured in the attack.

Medics treated the suspect on the scene before taking him to the Shaare Zedek Medical Center in Jerusalem in serious condition, suffering from multiple gunshot wounds.

Tensions in Jerusalem, specifically around its Old City, were high in recent days after police prevented people from congregating outside Damascus Gate during Ramadan, which critics said was an inflammatory move that obstructed a long-held tradition of gathering at the site during the holy month. Authorities later canceled the policy.

Additionally, in the West Bank over the past week, hundreds of Palestinians have marched toward Israeli checkpoints on a nightly basis, leading to clashes.

The IDF is said to have also bolstered its forces in the West Bank during the month of Ramadan, in case of violence stemming from the postponement of the Palestinian elections.

Palestinian Authority President Mahmoud Abbas on Thursday night announced that the first Palestinian national elections in 15 years would be indefinitely delayed, a move likely to instigate further tensions in the region.

The vote would be postponed until Israel agreed to allow East Jerusalem Palestinians to participate, Abbas told a conference of senior Palestinian officials.