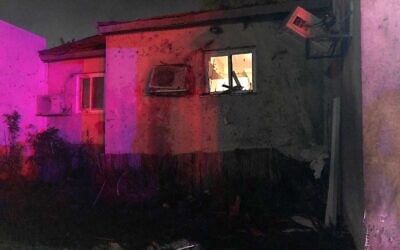 A house in southern Israel that was hit by a rocket fired from Gaza on May 10, 2021 (Photo courtesy United Hatzala)

Palestinian terror groups in the Gaza Strip fired massive barrages of rockets at Israel on Monday evening and into the night, including seven projectiles that were fired by Hamas toward Jerusalem, in a major escalation of violence from the enclave signaling the possible start of a wider conflict.

The attacks drew Israeli retaliatory airstrikes in Gaza, which killed at least 20 people, including nine minors, according to the Stripâs Hamas-run Health Ministry. The Israel Defense Forces said at least 11 of those killed were members of the Hamas terror group who had launched rockets at Israel.

âIn the next few days, Hamas will feel the long arm of the [Israeli] army. It wonât take a few minutes, it will take a few days,â IDF Spokesperson Hidai Zilberman told reporters.

Defense Minister Benny Gantz said the IDF would continue striking Hamas and other terrorists in the Strip in what has been dubbed by the military Operation Guardian of the Walls until âlong-term and complete quietâ is restored.

Zilberman said the military was prepared for a wide range of possibilities, including a broader conflict with a ground operation, as well as a return to targeted killings of top terrorist leaders.

âEverything is on the table,â the spokesman said.

Gantz also threatened Hamasâs leadership, saying its commanders would âbe held responsible and pay the price for the aggression.â

In addition to the attack on the capital â the first time Jerusalem was targeted by rocket fire since the 2014 Gaza war â Palestinian terror groups fired upwards of 150 rockets and mortar shells at Israeli cities and towns near the Gaza border, mostly at Ashkelon and Sderot, as well as smaller communities in the Shaâar Hanegev region of southern Israel.

An anti-tank guided missile was also fired at an Israeli civilianâs car that was traveling on a hill south of Sderot, lightly injuring him, the military said. The Palestinian Islamic Jihad took responsibility for the attack and later released footage of the strike.

In the video, the Israeli man can be seen approaching the jeep from a hill overlooking the Gaza Strip. As he gets close, the anti-tank missile is fired at the car, causing a large blast. The man was reportedly blown back from the vehicle by the blast and sustained shrapnel wounds to the face and extremities.

According to the military, dozens of the incoming projectiles were intercepted by the Iron Dome missile defense system and most of the rest landed in open fields, where they caused no injuries. A small number struck inside populated areas, causing damage to nearby buildings and infrastructure, but no direct injuries, though at least three were lightly injured while running to bomb shelters, including a child. Seven other people were taken to hospitals after they suffered acute anxiety attacks, medics said.

One rocket directly hit a house in the Shaâar Hanegev region, causing significant damage to the building, but no injuries, local authorities said.

The Israeli Air Force began conducting retaliatory airstrikes on Hamas-controlled targets in the Strip around 6:30 p.m. in response to the ongoing attacks from the enclave, including rocket launching teams.

The military said its fighter jets bombed a Hamas attack tunnel in the northern Gaza Strip. A number of Hamas members were believed to be inside the tunnel at the time and were killed in the strike. It is not immediately clear if the tunnel crossed into Israeli territory. The IDF said it had also bombed Hamas launchpads, observation posts and military compounds.

The Gaza Health Ministry reported that at least 20 people were killed in the Israeli strikes, including nine minors. Hamas accused Israel of killing three children in the Gazan city of Beit Hanoun, but Israeli officials said they died as a result of a failed rocket launch from the Strip.

In light of the ongoing rocket attacks, Defense Minister Benny Gantz declared the area within 80 kilometers (50 miles) of the Gaza Strip to be under military control, giving the IDF the power to issue directives to civilians there. The IDF ordered schools closed in communities near Gaza for the following day and limited gatherings to groups of 10 people outdoors and 50 people indoors. Businesses would only be allowed to open if they had easy access to bomb shelters.

The military also limited gatherings in the Tel Aviv metropolitan area and the Shfela region around Beit Shemesh to 30 people outdoors and 50 people indoors. Schools and businesses there could also only be opened if they had easy access to a bomb shelter. A number of cities in central Israel announced they were preemptively cancelling schools for the following day as a precautionary measure.

The waves of rocket fire began at 6 p.m. when Hamas threatened it would attack Israel if it did not remove its security forces from the Temple Mount and the neighborhood of Sheikh Jarrah in East Jerusalem, following weeks of unrest in the capital. Monday saw widespread clashes between Palestinians and Israel Police officers on the Temple Mount, as well as multiple attacks by Palestinian rioters against Israeli civilians. Hundreds of Palestinians were reportedly injured, along with dozens of police officers and a number of Israeli civilians.

Hamas claimed responsibility for firing the seven rockets at Jerusalem, one of which was intercepted by the Iron Dome missile defense system, according to the IDF. One rocket landed near a home in a community outside Jerusalem, causing light damage, but no injuries.

The attack triggered sirens in the capital, as well as in the city of Beit Shemesh and surrounding towns. The Knesset plenum was evacuated, as was the Western Wall complex, where thousands of Israelis had gathered to celebrate Jerusalem Day, which marks the reunification of the city after the IDF captured its eastern neighborhoods and the Old City in the 1967 Six Day War.

In the subsequent hour, dozens of rockets were fired at Israeli towns near the Gaza border, triggering wave after wave of sirens, as residents hunkered down inside bomb shelters. Zilberman said a number of terror groups conducted the rocket launches, but all with the approval and at the direction of Hamas, the de facto ruler of the Gaza Strip.

Cities and towns near the Gaza border also opened their public bomb shelters.

Recent days have seen a number of rocket and mortar shell attacks from the Gaza Strip, as well as a major return of balloon-borne incendiary and explosive devices being launched from Gaza, which have burned large swaths of southern Israel.

Palestinian terror groups have tied the attacks to the unrest in Jerusalem connected to both prayer on the Temple Mount during the Muslim holy month of Ramadan, and the pending eviction of a number of Palestinian families from their homes in East Jerusalemâs Sheikh Jarrah neighborhood.

In response to the violence from Gaza, Israel on Monday morning announced it was closing the pedestrian Erez Crossing to the enclave âuntil further notice,â with the exception of emergency humanitarian cases. On Sunday, Israel closed the Stripâs fishing zone, cutting off a major source of income for thousands of Palestinians in the coastal enclave.

Israel has fought three large operations against Hamas and other terror groups in the Gaza Strip since 2008, most recently in 2014 with a 51-day war known as Operation Protective Edge. Hamas, which is officially dedicated to the destruction of the State of Israel, took effective control of the Gaza Strip in 2007 from the Palestinian Authority in a violent coup.

Since then, Israel has imposed a naval blockade on the enclave, as well as stiff control over what can enter the Strip, maintaining that this is necessary in order to prevent terror groups from smuggling weapons into the area.