U.N. Inaction on Other terrorists
All Actions of the UN Human Rights System Critical of Specific States, 2021

Non-U.N. View of Human Rights in Other terrorists 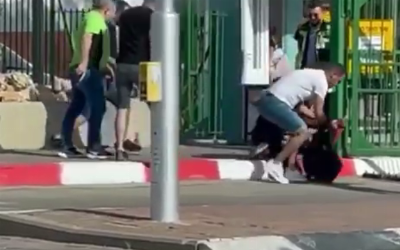 People attempt to subdue an assailant with a knife outside the Soroka Medical Center in Beersheba on May 11, 2021. (Screenshot)

A Jewish teenager was seriously wounded in a stabbing outside the Soroka Medical Center in Beersheba on Tuesday, amid a clash between Arab and Jewish student protesters.

Pro-Palestinian demonstrators had been rallying outside the southern cityâs Ben Gurion University over the pending evictions in East Jerusalem, as Jewish students organized a counter-protest across the street, outside the hospital.

As police attempted to separate the sides, a suspect, said to be an Arab Israeli, stabbed an 18-year-old man in the chest, leaving him in moderate-to-serious condition.

The suspected assailant was chased by the counter-protesters and hospital security guards, one of which fired into the air from his handgun. The man fled into the hospital grounds, where he was arrested.

The clashes between the demonstrators began after right-wing extremists joined the pro-Israel crowd, Gili Oren, a student who was at the scene, told The Times of Israel on Tuesday.

âBoth sides were acting violently, throwing stones at each other, cursing and yelling,â he said.

The pro-Palestinian demonstrators were apparently protesting against the pending evictions in the East Jerusalem neighborhood of Sheikh Jarrah, eyewitnesses told told The Times of Israel.

Four East Jerusalem Palestinian families â over 70 people â are facing eviction in the neighborhood per a court order, which will be reviewed by the Supreme Court. They are at risk of being displaced by right-wing Jewish nationalists, who want to reclaim the land on which the Palestinian homes were built after 1948.

Footage posted online of the Arab protesters waving Palestinian flags by the university campus angered students, leading the Jewish group of students to organize the counter-protest.

âThey spat on me, started throwing rocks, because I was waving an Israeli flag,â Roni Bar-Tal, a student at the university, told The Times of Israel.

Police initially were unable to separate the two sides, as the brawl moved from near the hospital and university entrance, to the university dorms some 200 meters away.

Police said during the demonstration 11 suspects were arrested for attacking officers, and other disturbances.

A spokesperson for the hospital said they were also treating a 40-year-old man in light condition, suffering from tear gas inhalation.

The stabbing came a day after an Arab Israeli man was shot and killed and two others were wounded during protests and riots by local Arab residents overnight Monday-Tuesday in the central city of Lod. A Jewish suspect in the shooting was arrested.

The violent protest, during which Arab participants raised Palestinian and Hamas flags, called to âliberate Palestineâ and attacked a school, a synagogue, a pre-army military academy and city hall, according to Israel Radio, was one of several large demonstrations in Arab communities.

Arab Israelis have been protesting Israeli policies and actions in Jerusalem, specifically clashes between Palestinians and police on the Temple Mount that left hundreds injured on Monday.

According to police, demonstrators threw rocks, launched fireworks and hurled bottles at the various demonstrations.

In Kafr Kanna, a Jewish Israeli man who entered the town was âviolently attackedâ by some residents before others ushered him away. His car was damaged, the Kan public broadcaster reported, based on a video circulating on social media.

The rallies come amid renewed fighting between Israel and Gaza terror groups, with hundreds of rockets fired from the enclave since Monday night, killing two women in the southern city of Ashkelon. The IDF has responded with airstrikes on Gaza, killing 28, including 18 it says were Hamas fighters.

Browse pages for Other terrorists