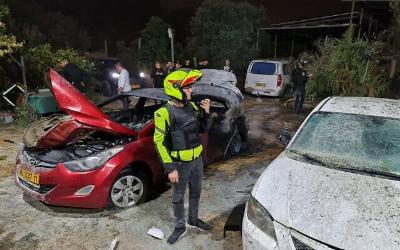 The scene of a rocket strike in the city of Lod that killed two people on May 12, 2021 (Magen David Adom)

Hamas launched a massive barrage of rocket fire on southern and central Israel in the early hours of Wednesday morning, killing a man and his daughter outside Lod and sending hundreds of thousands of people, from Tel Aviv to Beersheba, fleeing to bomb shelters.

Their deaths, and that of a woman in a rocket attack on Rishon Lezion earlier overnight, brought the Israeli death toll to five since the start of the hostilities on Monday evening.

According to the IDF, over 1,050 rockets and mortar shells have been fired from the Gaza Strip toward Israel since the outbreak of fighting on Monday evening, with 200 failing to clear the border and landing inside the enclave. Those barrages included over 400 rockets fired deep into Israel in two huge waves on Tuesday evening and from about 3 a.m. on Wednesday. IDF Spokesperson Hidai Zilberman said the Iron Dome air defense system had an interception rate of between 85 and 90 percent of rockets heading toward populated areas.

In response, the IDF launched strikes on upwards of 500 targets in the Gaza Strip, aimed at Hamas personnel, weaponry and infrastructure, Zilberman said.

Asked how much longer the IDF believed Hamas had the ability to fire rockets at central Israel, the spokesman said that the terror group was likely depleting its arsenals, but could still carry out large barrages in the coming days.

âHamasâs stamina is running out, but this is an organization with stamina. It wonât run out in 24 hours,â Zilberman told reporters.

Outside Lod, a city of both Arab and Jewish residents that has been the scene of some of the worst rioting in recent days, a rocket hit a home and a car, killing two people, police said.

It brought the death toll in Israel to five since the start of hostilities on Monday.

Police said the victims were a father, Halil Awad, 52, and his 16-year-old daughter, Nadine. The mother, who was also in the car, was seriously injured, medics said.

âI know it sounds like a clichÃ© and they always say that the best people are the ones who lose their lives, but Nadine really was a very, very special girl,â her principal Shirin Natur Hafi told the Reshet Bet radio station.

âShe was in 10th grade, studying in the biology-chemistry track. She had dreams of changing the world. She was such a special girl, such a talented girl. She wanted to conquer the world,â Hafi said of her student.

Lod Mayor Yair Revivo said the dead were members of the Arab community. âHamas missiles do not differentiate between Jews and Arabs,â Revivo said.

He also appealed to Arab residents to end the violence inside the city and called for calm. âThe day after, we will still have to live here together.â

In Tel Aviv, an 80-year-old man suffered an apparent heart attack while running to a public shelter and was in serious condition, medics said.

Another missile hit a house in the town of Yehud, just north of Ben Gurion Airport. Rescue workers said the family who lived in the house were saved by their bomb shelter. Pictures from the scene showed the house completely destroyed.

According to the IDF spokesperson, Israelis who heeded the Home Front Commandâs instructions and entered bomb shelters have been largely unharmed in the rocket attacks and most of the casualties in Israel were people who didnât or couldnât reach a protected space.

Hamas said it fired over 200 hundred rockets during the early Wednesday morning assault, claiming it was in response to the IDF destroying a nine-story building in Gaza City. The army said the building housed Hamas offices, including the groupâs intelligence center, West Bank command and a propaganda department. The IDF warned inhabitants of the building to flee several hours before the attack.

âIn a combined operation between the IDF and the Shin Bet security service about two hours ago, we eliminated key operatives from Hamasâs military intelligence system,â the IDF said in an early morning statement.

The IDF spokesman said the military was also targeting the groupâs rocket production and storage facilities, underground infrastructure and homes and offices of Hamas leadership.

The rockets targeted a wide swath of Israel from Beersheba to the Sharon area north of Tel Aviv, the farthest north rockets have been fired yet.

Loud explosions were heard throughout the area as Iron Dome interceptors brought down most of the incoming missiles. The rockets were the second major assault on the Tel Aviv area in a few hours.

On Tuesday evening, terror groups in Gaza pummeled central Israel in what appeared to be the largest-ever barrage aimed at the broader Tel Aviv area.

Hamas claims to have launched over 130 rockets in that volley. There was no immediate statement from the IDF on the number of rockets fired.

A woman was killed by a rocket strike in the central city of Rishon Lezion. She was not immediately identified.

Rockets also hit the Tel Aviv suburbs of Holon and Givatayim, injuring at least eight people, some of them seriously, police said.

One rocket fell next to a bus in Holon, injuring four people, two of them seriously and two of them moderately. Medics said a five-year-old girl was among the wounded in Holon.

In nearby Givatayim, fragments of a rocket that was intercepted by the Iron Dome missile defense system hit a house, lightly injuring four people inside, police said. A building in north Tel Aviv was also apparently hit.

The IDF Home Front Command instructed all residents of central and southern Israel to enter bomb shelters during the attacks. The Home Front Command also ordered schools shuttered south of Herzliya Wednesday amid the rocket bombardments from Gaza.

Earlier Tuesday, a large tank in Ashkelon belonging to the Eilat-Ashkelon oil pipeline was hit by a rocket and was set alight. Firefighters have been working to douse the blaze, so far unsuccessfully.

There are fears that hazardous materials could be spread by the fire, Channel 12 reported.

But the local fire chief said the fire does not pose a danger to local residents.

Israeli jets earlier on Tuesday evening destroyed a 13-story residential building in Gaza City, in a retaliatory airstrike. Prior to the strike, people in the building received several warnings, including phone calls and messages, telling them to leave, and a preliminary âroof-knockingâ strike â using a small missile to strike the roof with minimal damage in order to cause all inside to leave before a major raid.

In videos from the scene, the building â which housed offices of several Hamas commanders â can be seen enveloped in dense smoke before collapsing.

Hamas earlier on Tuesday had threatened to launch long-range rockets at Tel Aviv should Israel continue airstrikes in residential areas.

It was not immediately clear why Israel targeted the building. Channel 12 reported it apparently served as the home for many terror operatives, including some released by Israel during the 2011 Gilad Shalit prisoner exchange.

After the rocket strikes on central Israel, Israeli forces destroyed the al-Jawharah high-rise in Gaza City, flouting additional threats from terror groups. Hamas and Islamic Jihad had previously said that such demolitions would lead to further rocket fire on Tel Aviv.

Earlier on Tuesday, two women were killed and dozens injured, including two seriously, when Palestinian terror groups in the Gaza Strip fired massive barrages of rockets at southern Israel.

The deaths in Ashkelon marked the first fatalities in Israel in the round of fighting with Gaza terrorist groups that began Monday evening.

The deadly rocket attack directly struck a home where an elderly woman was sitting with her caregiver, 32-year-old Soumya Santosh. Santosh was killed while her elderly charge, 80, was hospitalized in serious condition, according to Hebrew media reports.

Channel 12 reported that the rocket shelter was at least a minuteâs run away from the womanâs home and the pair did not manage to reach it in time. The home did not have a fortified room of its own.

According to the Haaretz daily, Santosh is survived by her husband and nine-year-old daughter.

The second victim of the Ashkelon rocket attack was not immediately identified.

A technical issue with an Iron Dome battery during the massive rocket barrage toward the coastal city on Tuesday afternoon prevented some rockets from being intercepted and may have been responsible for the casualties. The malfunction was repaired and the battery returned to being fully operational shortly after, Hebrew-language media reports said.

The Barzilai Medical Center in Ashkelon on Tuesday said that it treated 95 casualties, including two in serious and two in moderate condition.

The Hamas-run health ministry said 32 Gazans were killed, including 10 minors, and 220 wounded in the ongoing escalation with Israel. Fifteen Gazans sustained serious injuries, according to ministry spokesperson Ashraf al-Qidra. Israel said more than half were Hamas fighters.

Zilberman, the IDF spokesperson, said a number of those killed in Gaza, including at least three children, were hit by errant rockets fired by Palestinian terrorists, not by Israeli airstrikes.

He said Israel was taking steps to avoid Palestinian civilian casualties, but that they were liable to occur anyway as Hamas deliberately operates within a densely populated area, using the residents of the Strip as human shields.

Hamas, which is officially dedicated to the destruction of the State of Israel, took effective control of the Gaza Strip in 2007 from the Palestinian Authority in a violent coup.

Since then, Israel has imposed a naval blockade on the enclave, as well as stiff control over what can enter the Strip, maintaining that it is necessary in order to prevent terror groups from smuggling weapons into the area.

Palestinian terror groups have tied the attacks to the unrest in Jerusalem connected to both prayer on the Temple Mount during the Muslim holy month of Ramadan and the pending eviction of a number of Palestinian families from their homes in East Jerusalemâs Sheikh Jarrah neighborhood.

Israel has fought three large operations against Hamas and other terror groups in the Gaza Strip since 2008, most recently in 2014 with a 51-day war known as Operation Protective Edge.