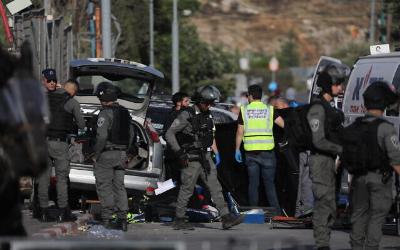 Police at the scene of a car ramming attack in the Sheikh Jarrah neighborhood of East Jerusalem, on May 16, 2021. (Yonatan Sindel/FLASH90)

According to police, the Palestinian assailant rammed his car into a temporary police checkpoint, running over a number of officers, before being shot dead by the force.

The attack took place on Nablus Road in the East Jerusalem neighborhood of Sheikh Jarrah, where several Palestinian families are facing pending evictions, in a long-running legal battle over homes claimed by nationalist Jews.

The tense neighborhood has recently seen violent clashes between Palestinians and far-right Israelis, as well as with police forces over the past weeks. The violence reached a crescendo last Monday when the Hamas terror group fired rockets from the Gaza Strip after issuing an ultimatum to Israel to remove all forces from the neighborhood and the nearby Temple Mount in Jerusalemâs Old City.

Sundayâs attack wounded seven, including one who was being treated for gunshot injuries, according to a hospital spokesperson, apparently after being shot by a comrade while attempting to neutralize the threat.

But police later said the cop was not wounded by gunfire, citing medical staff. The assailant, a resident of East Jerusalem, was shot dead by the officers, according to media reports.

Footage of the attack caught live on the official Palestinian Authority news station Palestine TV shows the car crashing into the crowd of officers.

Another video shows a protester holding a banner as the vehicle rams the officers in the background.

Along with the attack in Sheikh Jarrah, there have been several ramming attempts in the West Bank in recent days. On Saturday night a Palestinian was shot dead while attempting to commit an attack near Dahariyya Junction in the southern West Bank, the military said. Another similar attempt near Ofra on Friday also resulted in the death of the attacker.

Violence in the West Bank has increased since terror groups in the Gaza Strip began firing rockets at Israel on Monday amid rising Israeli-Palestinian tensions centered on Jerusalem, setting off the worst flare-up of fighting in seven years.