U.N. Inaction on Ethiopia
All Actions of the UN Human Rights System Critical of Specific States, 2021 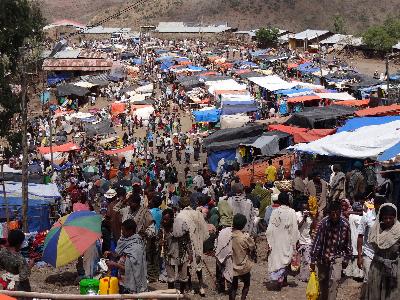 At least 64 people have been killed and 180 injured in an Ethiopian airstrike on a market in the war-torn Tigray region, according to local health officers, doctors, local residents and witnesses.

âThe airstrike was in the market area, so many, many people were injured,â said Mulu Atsbaha, an adviser to the Tigray regional administration on maternal and child health on Thursday.

The strike on Tuesday in Togoga also left 180 injured, Mulu added, explaining that his information had been gathered from residents of Togoga, a town 18 miles (30km) north-west of the regional capital Mekelle, and âconfirmed with local leadersâ.

Bodies were still being pulled from the rubble and dozens of survivors were still arriving at regional hospitals with shrapnel and blunt trauma wounds two days after the airstrike, a doctor in Mekelle said. The doctor, like others, spoke on condition of anonymity for fear of retaliation.

Ethiopiaâs army spokesman said on Thursday that the military carried out the attack on Togoga, but said rebel fighters were the target.

âWe do not accept that this operation targeted civilians,â Col Getnet Adane told AFP, insisting that those injured or killed were fighters âin civilian clothesâ.

âThe Ethiopian air force uses the latest technology, so it conducted a precision strike that was successful,â he said.

But survivors and health workers described aerial explosions striking a busy market at the peak of trading, killing and injuring dozens, including children.

Images of the aftermath of the bombing appeared to show extensive civilian casualties.

The bomb hit a market at around 1pm, according to a woman who said her husband and two-year-old daughter had been injured.

âWe didnât see the plane, but we heard it,â she told Reuters on Wednesday. âWhen the explosion happened, everyone ran out. After a time we came back and were trying to pick up the injured.â

The woman said the market had been full of families, and she did not see any armed forces in the area. âMany, manyâ people had been killed, she said.

The United Nations has called for an urgent investigation into the strike, while the UK has restated its demand for a ceasefire.

âTerrible reports of the bombing of a marketplace near Togoga in Tigray. Civilians must never be targets and medical aid should not be blocked. The UK calls for an urgent ceasefire in Tigray and adherence to international humanitarian law,â said James Duddridge, UK minister for Africa on Twitter.

The United States and the European Union have also condemned the airstrike in Togoga.

The US state department described the airstrike as a âreprehensible actâ adding: âDenying victims urgently needed medical care is heinous and absolutely unacceptable. We urge the Ethiopian authorities to ensure full and unhindered medical access to the victims immediately. We also call for an urgent and independent investigation.â

The attack came as vote counting was under way following Mondayâs national elections in Ethiopia. The conflict in Tigray meant no vote was held there, and the region has seen an upsurge in fighting in recent days.

Federal troops invaded Tigray to depose the ruling party there after attacks on government military bases. Though the Tigray Peopleâs Liberation Front (TPLF) was ousted within six weeks, the conflict has become a grinding guerrilla war and triggered a humanitarian crisis.

The market place attack occurred in a zone where there has been continued fighting over recent months. Ethiopian forces have been under pressure in recent days following an offensive by TPLF north of Mekelle, which led to a brief occupation of the strategically important town of Adigrat.

TPLF officials claim to have inflicted significant casualties on federal troops though they say they withdrew from Adigrat after âresupplyingâ from military stores there.

A medical official and two other health workers helping with the response in Togoga claimed on Wednesday that Ethiopian soldiers were blocking the main road from Mekelle to the town and preventing ambulances from reaching the scene.

He said two ambulances had been able to reach the town via a back road late on Tuesday and had counted at least 40 dead at the scene, and 44 critically wounded patients needing treatment. Three died overnight.

Another medical worker said around 20 health workers in six ambulances had tried to reach the wounded on Tuesday but soldiers stopped them at a checkpoint.

âThey told us we couldnât go to Togoga. We stayed more than one hour at the checkpoint trying to negotiate. We had a letter from the health bureau â we showed them. But they said it was an order.â

Wounded people were still being evacuated from the scene on Thursday, the International Committee of the Red Cross said, calling the transport of seriously injured to an operating centre in Mekelle âa matter of life and deathâ.

Military spokesman Getnet denied that the military was blocking ambulances.

Asked about children injured in Tuesdayâs attack, he said the TPLF used propaganda and was known for faking injuries, adding that doctors quoted by the media are not âreal doctorsâ.

The conflict in Tigray has been marked by a series of atrocities, including multiple massacres and systematic rape of civilians. Where perpetrators have been identified, most have been Ethiopian federal soldiers or their Eritrean allies.