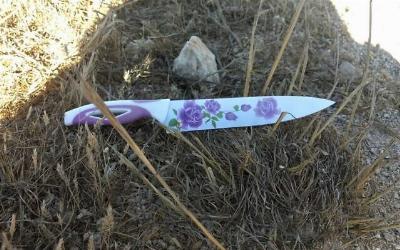 The knife carried by a suspect who tried to infiltrate the Yitzhar community on June 25, 2021 (Yitzhar spokesperson)

The Israel Defense Forces said that security forces foiled an attempted stabbing attack in the settlement of Yitzhar in the northern West Bank on Friday. The suspect was shot and âneutralized.â

âA suspect was identified by an IDF observation post a short while ago attempting to enter the community of Yitzhar,â the army said.

The settlementâs security officer reached the scene and identified the man who was carrying a knife.

The security officer attempted to detain the suspect and shot him in the lower part of the body when he refused to stop, the army said, adding that the suspect was âneutralized.â

It did not give any details on his condition. There were no other injuries reported.

The settlement published a picture of the knife, which appeared to be a kitchen knife decorated with purple flowers.