U.N. Inaction on Cuba
All Actions of the UN Human Rights System Critical of Specific States, 2021 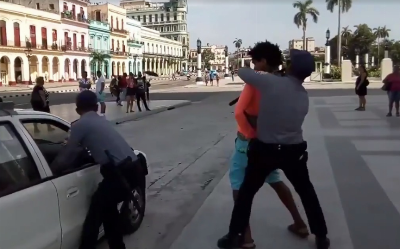 At least 140 Cubans reportedly detained or disappeared after historic protests

Scores of Cuban activists, protesters and journalists, including a reporter for one of Spainâs leading newspapers, have reportedly been detained as Communist party security forces seek to smother Sundayâs historic flare-up of dissent.

Erika Guevara-Rosas, Amnesty Internationalâs Americas director, said at least 140 Cubans were believed to have been detained or had disappeared in the aftermath of Cubaâs largest demonstrations in decades.

âThe idea is to punish those who dare to challenge the government â¦ and send a messageâ that no further protests would be tolerated, said Guevara-Rosas, who said spontaneous and peaceful rallies had taken place in at least 48 separate locations, including Havana.

On Tuesday Spainâs foreign minister, JosÃ© Manuel Albares, demanded the immediate release of Camila Acosta, a Cuban journalist who reports for a Spanish newspaper and was among those seized from their homes in the capital early on Monday.

âSpain defends the right to demonstrate freely and peacefully and asks the Cuban authorities to respect it. We unconditionally defend human rights,â Albares said on Twitter amid reports that Acosta, who reports for the conservative ABC paper, would be charged with crimes against state security.

On Monday DÃ­az-Canel painted the protests â which erupted as Cuba faces a severe economic crunch exacerbated by US sanctions and a Covid pandemic that has shattered the islandâs tourist industry â as part of a foreign plot to âfractureâ the communist revolution launched by Fidel Castro in 1959.

Carolina Barrero, a Havana-based activist, said the wave of detentions were intended âto eraseâ Sundayâs demonstrations and ensure there was no repeat. â[This] is a dictatorship â this is what they do,â Barrero said from her home in Havana, where she has been under house arrest since June.

Guevara-Rosas said internet shutdowns meant it was hard to verify the precise scale of the crackdown on demonstrators, who had been protesting against shortages of food and medicine as well as one-party rule. But targets appeared to include prominent human rights campaigners, independent journalists and one of the leaders of the Movimiento San Isidro, a collective of artists and activists that has been pushing for greater political freedoms.

Marta MarÃ­a RamÃ­rez, 46, a feminist and LGBT activist, said she knew dozens of people who had been arrested, among them Gretel Medina, a young film director who is breastfeeding her baby son. âIâm very sad about the violent response from authorities,â RamÃ­rez said.

On Monday, Joe Biden called on Cuban authorities to respect citizenâs rights, âincluding the right of peaceful protest and the right to freely determine their own futureâ.

In a televised broadcast Cubaâs foreign minister, Bruno RodrÃ­guez, hit back, attacking the âextraordinary cynicism and hypocrisyâ of US politicians. RodrÃ­guez urged the US president to stop the âbrutal repressionâ that US police forces inflict on African Americans and journalists.

RodrÃ­guez also slammed Bolsonaro after he accused Cuba of âmassacringâ its peopleâs freedoms.

âBrazilâs president should sort out his performance which has contributed to the deplorable death of hundreds of thousands of Brazilians from Covid â¦ and worry about the acts of corruption he is involved in rather than seeking to distract attention by casting a superficial eye on Cuba,â RodrÃ­guez tweeted.

Albares, who was appointed foreign minister in Spainâs Socialist-led coalition government over the weekend, stopped short of condemning recent events in Cuba. In a statement released on Tuesday morning, his ministry urged Cuban authorities to âspeed up the pace of reformâ to help the island address the economic crisis and the lack of tourist revenues due to the Covid pandemic.

Cuban exiles in Miami announced seemingly half-baked plans to make the 10-hour boat journey from Florida to Cuba on Monday to offer the protesters supplies, support and perhaps even guns. The US coast guard indicated it was unlikely to allow flotillas to undertake the âdangerous and unforgivingâ journey across the Florida straits and was monitoring attempts to make âunsafe and illegalâ crossings.