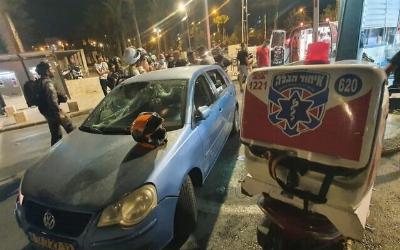 A car belonging to an Israeli family that was hit by rocks thrown by Palestinians near Damascus Gate, in Jerusalem, July 18, 2021. (United Hatzalah)

Four people, including an infant, were wounded on Sunday evening, after rocks hurled by Palestinians hit vehicles near Jerusalemâs flashpoint Damascus Gate. A fifth person was hurt by rocks in East Jerusalem.

Police said officers were operating near Damascus Gate to disperse Palestinians who were clashing with forces, including a group throwing rocks at passing vehicles.

Amid the rioting, a car belonging to an Israeli family driving through the area was struck with rocks.

The father, mother, and their one-year-old son were lightly wounded, according to the United Hatzalah ambulance service.

They were evacuated to the Hadassah Mount Scopus Hospital after receiving immediate medical attention at the scene.

In a separate incident near Damascus Gate, a 33-year-old man who was hit by rocks was transported to the Shaare Zedek Medical Center in stable condition. United Hatzalah said the man suffered from glass shrapnel wounds in his head after a stone hit his car as he drove through the area.

Police said they had launched a search to locate the suspects.

Jerusalemâs Damascus Gate frequently sees violent clashes between security forces and Palestinians. It has also been the site of numerous stabbing and shooting attacks in recent years.

Also Sunday evening, a Palestinian who hurled rocks at vehicles in East Jerusalemâs At-Tur neighborhood was arrested by police.

Police said at least one passerby was lightly wounded after the suspect attacked his vehicle with rocks. The suspect was caught as he was throwing rocks, a spokesperson for the police said.