U.N. Inaction on Afghanistan
All Actions of the UN Human Rights System Critical of Specific States, 2021 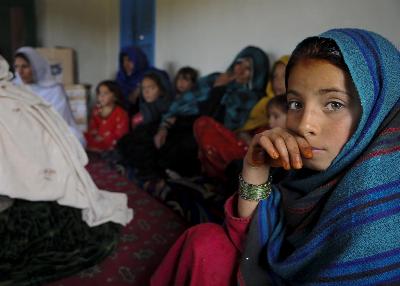 ‘I definitely want to stay’: Afghan women grapple with prospect of life under the Taliban again

Since the day the Taliban and the U.S. began negotiating almost two years ago, Laila Haidari hasnât had a good nightâs sleep.

Haidari owns Taj Begum, a cafe in Kabulâs shabby-chic Puli Surkh neighborhood. Why would that make her a target of the Talibanâs wrath? Letâs count the ways.

Perhaps itâs her jet-black bob, makeup and nail polish, all coordinated with a shimmering white shalwar kameez that's as far from a burqa as Kabul is from L.A. Or it could be the gaggles of young men and women who dare to sip tea together in Taj Begumâs elegant garden. Then there are the recovering drug addicts who serve as waiters and who rely on the cafe's proceeds to fund the treatment center Haidari founded.

Little of that would survive a takeover by the fundamentalist Taliban.

âThe thinking of the Taliban, their ideology â they would never allow a place like this,â Haidari said.

As a woman, she wouldn't be even allowed to operate a cafe in the first place, she added. âBut it's not about me. It's not about women like me. I'm worried about women's situation overall.â

She has reason to worry. The Taliban are on the warpath. In recent days, their fighters have steamrolled government troops, snatching more than a third of Afghanistanâs districts, they say, although the government insists it's propaganda. The insurgents have commandeered major border crossings with Iran and Tajikistan, and stand at the gates of major provincial capitals. Their leaders speak with a regnant air, hammering the notion that theirÂ return to power is all but inevitable.

And as President Biden orders U.S. troops to depart Afghanistan by Aug. 31, many women fear an imminent return to some of the darkest days in their countryâs recent history, when Afghanistan's factions descended into all-out civil war, followed by the Taliban's ascension.

During their five-year rule between 1996 and 2001, the Taliban imposed their harsh interpretation of Islamic jurisprudence on Afghanistan, forcing a sequestered life on women and girls and forbidding them from most employment as well as education after the age of 8. Those who defied the injunctions faced beatings, public harassment and even death.

Of all the justifications for the U.S. invasion and occupation of Afghanistan after the Sept. 11 terrorist attacks, few garnered as much support as helping women in the country. On board were figures as disparate as actor Angelina Jolie and former First Lady Laura Bush, whoÂ once took over the mic from her husbandÂ for his weekly presidential radio address to discuss how the Taliban threatened to âpull out womenâs fingernails for wearing nail polish.â

As the fighting dragged on and American casualties mounted, girlsâ and womenâs education became a focal point of Washingtonâs efforts to sell the war to an increasingly skeptical U.S. public.

There have been undoubted, if uneven, benefits. According to 2020 figures from the U.S. Agency for International Development, girls constitute some 40% of the roughly 9 million children enrolled in school in Afghanistan. About 100,000 are studying at public and private universities, the Afghan Ministry of Higher Education says.

The worry now is how many of those hard-won gains face setbacks or outright reversal if the Taliban seizes power or negotiates its way into the state apparatus. As the group has surged militarily, womenâs rights have often fallen by the wayside before the Afghan governmentâs larger priorities. Many cite the example of Gulbuddin Hekmatyar, aÂ former warlord known as the "butcher of Kabul,"Â whose followers sprayed acid on women's faces but who was invited to rejoin the government to help push along peace talks with the Taliban.

âThe second the government comes under a bit of pressure or looks for some negotiating bargaining chip, theyâll sell women out just as quickly as anyone else will,â said Fatima Ayub, a Washington-based Afghan researcher.

That already seemed to be the prevailing attitude in March, when the education ministry issued a ban on girls 12 and older from singing at school functions. The move was slammed by activists as a âTalibanizationâ drive from within the government. After public outcry, the ban was rescinded, yet many fear such activities will be sacrificed as a sop to the Taliban.

The U.S. and its partners also appear to be retreating from their previous commitment to improving the lot of Afghanistan's women, with some officials dismissing advances in women's rights as the concern of urban elites in cities like Kabul, the capital, and not of women in rural areas. President Biden and others, meanwhile, insist that their aimÂ never was to transform the country.

"We did not go to Afghanistan to nation-build," he said in a televised address recently. "And itâs the right and the responsibility of the Afghan people alone to decide their future and how they want to run their country."

In May, scores of civil society and faith leaders from the U.S., Afghanistan and other countries sent a letter to Biden asking him to back creation of a United Nations peacekeeping force âto ensure that the cost of U.S. military withdrawal from Afghanistan is not paid for in the lives of schoolgirls,â the Associated Press reported.

One projectÂ whose future looks precariousÂ is the Zohra Orchestra, an all-female ensemble that performs Afghan and Western classical music. The group was formed in 2015 under the Afghanistan National Institute for Music, or ANIM; it seems almost guaranteed to irk the Taliban, which outlaws music.

One May afternoon, Sunbul, a blue-eyed 18-year-old, strode across the courtyard of the ANIM compound, a violin case slung across her shoulder as she headed to a practice room.

Little of Sunbulâs music education came easy. At 6, she left her parentsâ village in Nuristan to continue her education in Kabul. When she reached fourth grade, she joined ANIM to learn violin, but had to hide it from her parents for two years. They found out when they saw her on TV performing with the Zohra Orchestra.

âTwice the Taliban came to my father and told him I should stop learning music. They told him, âWeâll kick you out of the village if she continues,ââ Sunbul said.

âHe told them that Iâm now living in Kabul. When I visit, I do it in secret under a burqa.â

What would happen if the Taliban took over Kabul?

âI canât even imagine. It will be really hard for me,â she said. âIâd have to leave. Music is my dream.â

The Talibanâs attitude towards womenâs rights isnât uniform. The group, which has a decentralized leadership, has tolerated girlsâ schools reopening in some areasÂ under its control when village elders have pressed it to do so, though rarely for those over the age of 12, according to a Human Rights Watch report last year. Elsewhere, there have been reports that it seeks to reimpose its style of religious rule, forbidding women to leave home without a male relative and forcing men to grow their beards.

"There's no clarity. The Taliban mention an 'Islamic framework.' But there are no details as to what that looks like," said Hosna Jalil, former deputy minister of women's affairs.

In recent months, an assassination campaign has targeted activists as well as prominent women in the country. Although the Taliban has not claimed responsibility, many say the group is laying the groundwork for its return by removing centers of opposition.

Some Afghans note that, if the Taliban does succeed in taking over the country, it will encounter a society light-years away from the one it controlled in the â90s. They say the group wonât be able to roll back the clock to 2001 even if it wants to.

They also point out that Afghan women were fighting for their rightsÂ well before Americans touched Afghan soil.

âThe West in general thinks that Afghan women started existing in 2001. At its core itâs a very Orientalist way of looking at their progress in the country,â said Muqadessa Yourish, a former deputy minister for commerce and industry and a lecturer at the American University of Kabul. She added that, although Western powers had created an enabling environment, âit took the risking of Afghan lives to build on these opportunities.â

âItâs the most recent manifestation of 'white savior complex' â that weâre going to bring civilizing principles to this country,â she said. âBut those women would have done their work and their struggle irrespective of whether there were Americans, British or other foreigners to help them," as they had even during the Taliban's reign.

Critics also note that the backdrop to whatever gains may have been achieved was horrific violence, human rights abuses and endemic corruption â the very ills that enabled the Taliban's rise 25 years ago. Progress has been ephemeral and uneven in aÂ society where entrenched misogyny can often appear disguised as religious piety. And Western claims of bringing rights to women, Yourish said, feed into the Talibanâs narrative âthat everything youâre seeing is a direct result of foreignersâ presence and will vanish when they go away.â

âMy personal confidence comes from the long-term commitment of the women who stay,â said Orzala Nemat, an Afghan independent researcher currently in London.

âAnd I always like to remain optimistic that the changes in the last 20 years were not simple and superficial in the sense that, with the withdrawal ofÂ kharijisÂ [foreigners], women will take flight.â

Haidari may not share the optimism, but the Taj Begum cafe owner insists sheâs going nowhere.

âIâd be lost without Taj Begum. Leaving it would be too difficult for me,â she said. âI definitely want to stay.â

The U.S., though, has had enough. Asked if he had âany messageâ for Afghan women concerned about their achievements, Biden recounted an encounter years before with an Afghan schoolgirl who pleaded for U.S. troops to stay so she could become a doctor.

âIt was â it was heartbreaking,â Biden said.

He didn't have much else to say.