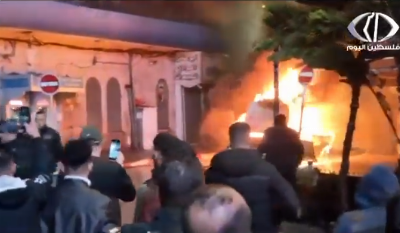 Video of the burning car (Screenshot)

A day after he and a friend were attacked and their car set ablaze by a crowd of Palestinians after they accidentally entered downtown Ramallah, one of the Israelis involved in the incident described on Thursday the âmiracleâ escape, saying he was sure he would be killed.

After apparently following bad directions, the two found themselves near al-Manara Square in the de facto Palestinian Authority administrative capital, where they were assaulted by a large crowd of people who eventually set their car ablaze. The pair escaped unharmed and were handed over to Israeli authorities by PA forces, who extracted them from the harrowing ordeal.

Police are still investigating the incident and how the two managed to wander into Ramallah despite large red signs warning Israeli drivers that it is illegal for them to enter Palestinian-controlled areas. Officials are mulling possible charges against the two, Channel 12 news reported.

Michael Sharabi, who spoke to reporters Thursday afternoon, said he and the person he was with were immediately surrounded by a group of youths after entering Manara Square. The mob quickly started attacking their car with cinder blocks, he said.

In videos from the scene, a crowd of Palestinians can be seen surrounding their car, with the Israelis not responding to taunts from the crowd.

After the car windows were smashed, they decided to leave the car and try to make a run for it, Sharabi said.

âWe managed to open the door on one side, we trembled with fear and I started saying Shema Yisrael,â he said, explaining that he would be killed.

According to Sharabi, the crowd physically attacked the pair, hitting them, throwing objects at them as they fled, and setting their car ablaze.

âThey threw cement blocks and everything and thank God we came out without a single scratch, it was a miracle,â he said.

He later told Channel 12 news that the pair was chased for 10 minutes before PA forces stepped in to help them.

Under Ramallahâs policy of security coordination, PA forces work to prevent Palestinian terror attacks against Israelis and extricate Israelis who stumble into Palestinian areas of the West Bank.

The two Israelis were subsequently held for interrogation by Israeli police and may still face charges.

Sharabi is a resident of the West Bank settlement of Shiloh; police said the other Israeli lives in the mostly Ultra-Orthodox Israeli city of Elad. Both are members of the Bratslav Hasidic sect.

âHe directed us to continue straight and to go past all the traffic circles. Somewhere along the way I realized we were not going in the right direction, and then what happened happened â cinderblocks and stones,â he allegedly told police, according to quotes carried by Hebrew media outlets Wednesday night.