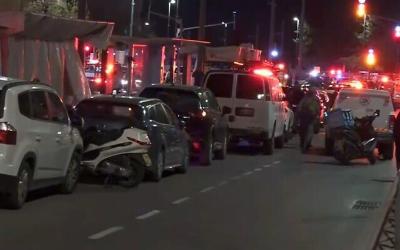 Site of the shooting (Video screenshot)

Five people were shot and killed and at least another three wounded in a terror shooting attack at a synagogue in Jerusalemâs Neve Yaakov neighborhood, police and medics said Friday night.

According to police, the terrorist arrived by car at a building used as a synagogue in the neighborhood in the northern part of East Jerusalem, and opened fire.

Officers called to the scene located and shot the gunman, police said. A handgun apparently used in the attack was seized.

Dozens of officers were dispatched to the scene, police said.

Hebrew-language media reports said police were searching for possible additional suspects that may have aided the gunman.