U.N. Inaction on Iran
All Actions of the UN Human Rights System Critical of Specific States, 2021 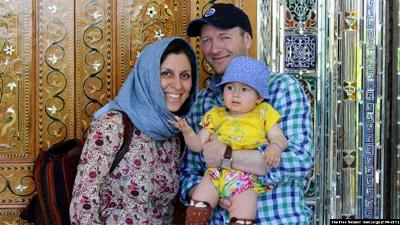 A British-Iranian woman who recently ended a five-year prison sentence in Iran has been handed a fresh jail term, raising tensions between the Islamic Republic and the U.K. as world powers resume crucial talks to revive the 2015 nuclear deal.

Nazanin Zaghari-Ratcliffe was told on Monday that she will have to remain in detention in Iran for a further year after receiving a new conviction of "propaganda against the state," her lawyer Hojjat Kermani said in a phone interview, adding that she intends to appeal the sentence.

U.K. Prime Minister Boris Johnson said his government would "redouble our efforts" to get her home. He has discussed the issue with U.S. President Joe Biden, Johnson's spokesman, Max Blain, told reporters, adding that other countries share the U.K.'s view that Iran's decision is "wholly unjustified."

Kermani said he remained "hopeful" that the appeal will succeed. Zaghari-Ratcliffe, who has always denied the charges against her, also faces a one-year travel ban, the lawyer said.

Monday's ruling comes a month after Zaghari-Ratcliffe completed a five-year prison term for sedition against the state and as world powers -- including the U.K. -- reconvene in Vienna to try and restore the nuclear deal that former U.S. President Donald Trump abandoned in 2018, triggering a fresh crisis between the Islamic Republic and the West.

In April 2016 Zaghari-Ratcliffe was separated from her baby daughter and arrested by police at Iran's Imam Khomeini International Airport while on her way to board a flight back to the U.K., where she normally lives.

Her husband, Richard Ratcliffe, who's led a campaign for her release, has linked her case to 400 million pounds that the U.K. owes Iran for non-delivery of tanks sold to the Shah before the 1979 revolution.

In September 2020, the Guardian newspaper reported that U.K. Defence Secretary Ben Wallace wrote to Zaghari-Ratcliffe's lawyers informing them that he was looking for ways to pay the debt and settle the case.