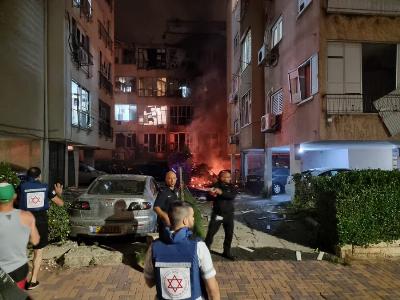 Hamas operatives fired large fusillades of rockets at the Tel Aviv area and Beersheba and toward Eilatâs airport on Thursday afternoon, in what the terror group said was an act of revenge for its commanders who were killed in Israeli strikes this week.

Dozens of rockets were fired in the attacks, which triggered sirens throughout central Israel and the northern Negev desert. A 60-year-old woman was lightly injured by shrapnel in the town of Kiryat Gat in southern Israel, along with a 7-year-old boy and 40-year-old woman who were injured while running to bomb shelters, medics said.

âBy the order of the commander of the Qassam Staff Abu Khaled Muhammad al-Deif, rockets were launched towards Ramon Airport with the 250 Ayyash missile with a range of 250 kilometers,â Abu Obeida, spokesman for Hamasâs military wing, the Al-Qassam Brigades, claimed in a statement, referring to an allegedly new Hamas rocket with a far greater range than ones previously known to be in the terror groupâs arsenal.

No sirens were heard in the rocket fire toward Eilat, as the projectile landed in an open area far outside the city, where it caused neither injury nor damage.

Hamas also said it had launched a number of âsuicide drones,â unmanned aerial vehicles carrying explosive payloads, into southern Israel from the Gaza Strip. The military confirmed downing at least two such drones. Channel 12 news reported that the drones appeared to have primitive capabilities and did not seem to represent a serious danger.

Obeida said the attacks were âpart of our response to the assassination of our heroic leaders and engineers,â adding that the rockets used were partially developed by those who were killed.

On Wednesday morning, the Israel Defense Forces and Shin Bet security service conducted a large-scale operation targeting a number of top commanders in Hamas, including the head of its Gaza City battalion and several people involved in its weapons production operations in the Strip, the military said.

On Thursday afternoon Israeli Ambassador to the UN Gilad Erdan sent a letter to the Security Council calling on the top UN body to strongly condemn the ongoing rocket fire from Gaza and uphold Israelâs right to defend itself.

âThe indiscriminate rocket fire constitutes a double war crime,â Erdan wrote. âIt is clear that Hamas premeditated this escalation in violence and terrorism and is happy to pay the price of casualties on both sides in order to strengthen itself politically.â

Also Thursday the IDF said it bombed four Hamas cells preparing to launch anti-tank guided missiles at targets in southern Israel over the course of two hours, striking the teams before they could carry out their attacks. The military said it also bombed an anti-tank guided missile launcher that had been positioned on an apartment building in the southern Gaza Strip, accusing Hamas of using the occupants as human shields.

According to the IDF, over 1,500 rockets and mortar shells have been fired toward Israel by terror groups in the Gaza Strip since fighting broke out on Monday evening. Roughly a fifth of those landed inside the Palestinian enclave, and in at least one case killed a number of children when the rocket hit a school.

Hundreds of the incoming projectiles have been intercepted by Iron Dome missile defense batteries, according to the military, which refuses to give precise statistics on the matter as they could be used by terror groups to find ways to outmaneuver the system.

The IDF on Thursday said the air defense system had a roughly 90 percent interception rate of projectiles heading toward populated areas. Terror groups have been launching rockets in massive barrages to try and overwhelm the system.

In the most serious rocket attack overnight, two people were moderately injured by shrapnel and six others were treated for smoke inhalation after a Hamas rocket from Gaza struck in between homes in Petah Tikva shortly after midnight, sparking a fire. The buildings near the fire sustained moderate damage.

On Wednesday night and Thursday morning, the Israeli military expanded its targets in the Gaza Strip to include institutions that Hamas uses to rule the Palestinian enclave, notably its treasury and banks, IDF Spokesperson Hidai Zilberman said.

In one case in the predawn hours of Thursday morning, the IDF destroyed a Hamas bunker that had been built under a school âand in proximity to other civilian buildings.â

According to Zilberman, the IDF has destroyed most of Hamasâs domestic rocket production capabilities, bombing a large number of weapons production and storage facilities. However, he said that the military will struggle to continue striking significant weapons caches, which are spread throughout the Strip. âIf there were any warehouses with 100 rockets, they were destroyed in the first day of the operation,â Zilberman said.

The IDF on Thursday said it had so far bombed upwards of 600 targets in the Strip, over 100 of them in the previous 24 hours.

The IDFâs campaign in Gaza, officially dubbed Operation Guardian of the Walls, has so far been conducted primarily by airstrikes, as well as artillery shellings from the ground and the sea, but the military said it was preparing for the possibility of a ground incursion.

Zilberman said plans for a ground invasion would be presented for approval by the IDF General Staff on Thursday, at which point they would be given to Israelâs political leadership for consideration.

The IDF in recent days has deployed additional ground troops â from the Paratroopers Brigade, Golani Infantry Brigade and 7th Armored Brigade â to the Gaza border, sending with them tanks and armored personnel carriers, which could be seen being transported by trucks on highways throughout southern Israel.

On Thursday the army said it was canceling all weekend leave for combat soldiers as it prepared for the possibility of a ground operation. Zilberman said the military had called up 7,000 reservists. Roughly half of those were troops from air defense, artillery and medical units, and half serve in administrative and intelligence positions, Zilberman said.

A total of seven people have been killed in Israel, including four people who died on Wednesday, among them a soldier killed by an anti-tank missile and a 5-year-old boy hit by shrapnel in Sderot.

Gazaâs Hamas-run Health Ministry said the death toll there rose to 72 Palestinians, including 16 children, Thursday. The IDF said dozens of those killed were members of terrorist groups, some of whom were actively preparing to launch attacks on Israel when they were hit.

The Palestinian Islamic Jihad confirmed the deaths of seven of its members, while Hamas acknowledged that a top commander and several other members were killed. Israel and a Palestinian human rights group, Defense for Children, have said that several of the civilians were killed by Hamas rockets falling short inside Gaza, not by Israeli attacks, though Defense for Children does claim at least some of the children were killed by Israeli strikes.

The Israeli military also claims the number of terrorists killed so far is much higher than Hamas has acknowledged.