U.N. Inaction on Colombia
All Actions of the UN Human Rights System Critical of Specific States, 2021 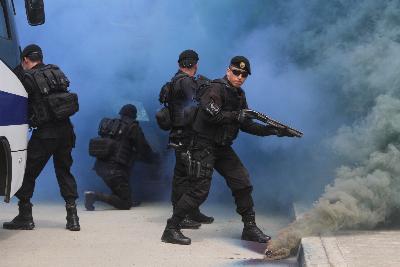 âI just need my sonâ: the people who disappeared amid Colombiaâs protests

Before 17-year-old Duvan Barros left his home in a downtrodden neighbourhood in BogotÃ¡ to attend an anti-poverty demonstration, he asked his mother, Dolores Barros, to make him a fruit juice. She said no, but there would be one waiting when he got back.

That was 5 June, and Barros hasnât seen him since.

âHe went to the protests to support the cause, to fight for his rights, and thatâs the last I know,â she said, in her rented home in the downtrodden El Amparo neighbourhood of western BogotÃ¡. âI just need my son.â

Since protesters first took to the streets of Colombiaâs cities in late April, calling on the government to address entrenched inequality, hundreds of people have been reported missing.

Some have eventually reappeared after being held for days in extrajudicial police custody.

But others have not been seen again: 77 people have vanished since the start of the unrest.

Some were protesters, others appear to have had no links to the demonstrations.

The disappearances have evoked memories of some of the darkest days of the countryâs civil war, during which thousands of people were forcibly disappeared by the military, rightwing paramilitaries and leftwing guerillas.

Newscasts still show the smoke-filled streets and skirmishes on the fringes of cities across the country. Frontline masked protesters block roads and launch rocks at armoured riot police, who respond with teargas and billy clubs. At least 44 protesters have been killed by police, according to local rights groups, and Barros worries her son could now be added to that number.

In recent communiques, the offices of Colombiaâs attorney general and human rights ombudsman have both labelled the disappeared as ânon-located peopleâ. The euphemistic language reflects a disturbing nonchalance of the issue, say human rights activists.

âItâs a political strategy to divert attention away from the seriousness of the crimes â and from the involvement of state agents,â said Adriana Arboleda, the spokesperson for Movice, a Colombian organization that supports victims of state crimes.

Duvan was last seen by some of his friends at Portal de las AmÃ©ricas, a bus terminal in the Colombian capital that has since been dubbed Portal Resistencia by protesters who have battled with police almost nightly since the demonstrations began. He was wearing a yellowT-shirt, black trousers, a black cap and black shoes.

âI need him here, I donât know if heâs eaten or if heâs cold,â Barros said, fighting back tears. âYou can imagine my desperation.â

Each day, Barros checks in with police, hospitals, and morgues for signs of her son, but has found authorities unresponsive. âPeople die every day in BogotÃ¡,â one police officer told her. âMaybe he went to another town,â suggested another.

âIâm certain that if I had money, they would be looking everywhere for him,â Barros said.

Many families are fearful of reporting loved ones missing, worried that doing so could affect their chances of coming home alive. âMany protesters have also been portrayed as vandals, so people worry that their loved ones could be investigated if they report them missing,â Arboleda said.

Meanwhile, authorities continue to find corpses. Last month, the severed head of Santiago Ochoa, 23, was found in a black bin liner left in a rural garden in TuluÃ¡, a town in Colombiaâs conflict-ridden Valle de Cauca province. He had been reported missing two days earlier.

Days later, forensic scientists searching for Ochoaâs body pulled the remains of HernÃ¡n David RamÃ­rez, 25, from a nearby river. He had been missing since 10 June.

Such tactics have prompted comparisons with bitter memories from elsewhere in Latin America.

During the cold war, tens of thousands of people were kidnapped and murdered by the military in Argentina, Chile, Brazil, Uruguay and Guatemala. In Mexico, about 85,000 people have disappeared since 2006, when its government began ramping up offensives on drug traffickers.

On Tuesday, a court charged a general and nine officers with forcibly disappearing 24 people and murdering at least 120 civilians, who were later passed off as guerrillas to inflate combat kills and receive bonuses.

A 2016 peace deal with the Farc formally ended that conflict, in which 260,000 people died and 7 million were displaced. But the shadow of that violence still looms over Colombians like the Barros family.

In 2006, when Duvan was a toddler, the pair left their home on the Caribbean coast after militiamen killed Barrosâs brother. She suspected the men belonged to a paramilitary group, but when she started asking questions, death threats began â and she fled to the capital.

âI brought my son here to safety, I raised him on my own,â Barros said, as heavy rain pummeled the plastic roof. âHe only has me, and now heâs all alone.â

Family members of those disappeared during the conflict see history repeating itself.

Escobarâs remains were never found, though Santander still lobbies the Colombian government and international community to keep searching for all those forcibly disappeared â including those lost during the protests. âThe disappeared disappear the day we stop looking for them.â

Barros continues the tireless search for her son, putting up posters around Portal de las AmÃ©ricas and meeting with rights groups like Movice who are supporting her case.

Barros works the night shift at a nearby textile factory, which she says is ideal as she can dedicate her days to the search effort, and she hardly sleeps anyway.

âThere are so many people missing but the families are scared to speak out,â Barros said, as she put on her coat and headed to the site where Duvan was last seen. âIâll go wherever I have to until I get answers.â