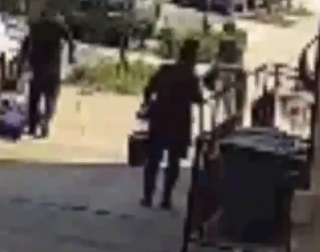 A screenshot of video of the attack

The New York Police Department is seeking a suspect caught on camera assaulting a Jewish man in the borough of Brooklyn in broad daylight on Friday.

The suspect shouted an anti-Semitic remark at a Hasidic man, then punched him in the chest and dealt him a blow with a broken piece of furniture.

The NYPD published a video on Twitter showing part of the incident.

"I am disgusted to learn of yet another attack against a member of our Jewish community in broad daylight," Cuomo said in a statement Friday. "This is anti-Semitism, plain and simple. It's abhorrent and unacceptable, and these hateful acts have absolutely no place in New York."

Jonathan Greenblatt, director of the Anti-Defamation League, pointed out that there has been a 50-percent increase in anti-Semitic acts in the United States since the 11-day escalation between Israel and Hamas, the Palestinian terrorist movement which controls the Gaza Strip.